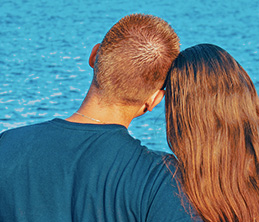 I have found this to be so true and rarely acknowledged. In my sacred sexuality studies, Tantra Yoga classes and sessions it is incredible to see, feel and witness this first hand. I love the article I discovered and am sharing this week. Please also share with the men and women in your life.

Men need to be held: emotionally, mentally, physically and spiritually.

Society has conditioned many of us to believe that men should be the strong, protective, stable archetype and that they aren’t generally as emotional as women and therefore we aren’t used to seeing grown men break down and cry when their feelings overwhelm them. We don’t often hear them voicing their vulnerabilities and when men say, “I need to be held,” it can turn both men and women away perceiving that they are needy, insecure and possibly even immature or weak—so the men suffer in silence.

I may be wrong, but I think many men would not feel comfortable starting a conversation about how they wish their partner would wrap their arms around them, hold them safe, let them speak from the heart and let the built up emotional tears flow. I believe they would find this challenging to unearth, with a woman, and most certainly, within their male friendship circles.

Possibly the most difficult thing about all of this is that men don’t just need their loved one, or even other women to hold them—they also need a safe space to be held by other men. I’m not suggesting all men would feel comfortable being physically comforted by other men, though what I do believe is that many of them would benefit greatly and feel emotionally, mentally and spiritually nourished and satisfied through connecting intimately and deeply with other men and communicating their soul from the inside out. And if men can feel comfortable holding, nurturing and comforting one another, then I feel that is something to be celebrated, not questioned or looked down upon.

According to research carried out with men and their friendships, the majority of men are afraid to be affectionate or to be emotional with other men as they are afraid of receiving homophobic comments. The observations showed that in first grade, boys were happy to hold hands, join arms and hug one another, but if they continued this behavior, by the time they reached fifth grade they would be subjected to cruel, demeaning comments from others in their class. Therefore, as the boys grew older many would keep their emotions closely guarded and be wary of getting too close to other males, as heterosexual men would be called “gay” in a way that was insulting. This behavior has long lasting implications and not also only hurts the heterosexual men, it also hurts gay men and also has an effect on adult relationships as men still protect their emotions and affections for fear of feeling that conditioned shame.

Kevin Smith describes that when cuddling, a powerful hormone called oxytocin is released and the effects of cuddling increases bonding, lowers stress, slows the heart rate and lowers blood pressure. Smith explains that through his practice where he holds men who are “gay,” “straight,” or “queer,” in a non-sexual way, that:

“Many men who have no interest whatsoever in exploring other men sexually still need warm, supportive, caring relationships with other men. We need affection from each other (regardless of orientation). Many men of all orientations want some sort of caring touch that doesn’t involve sex, but something more than a high-five or a slap on the back. We need to be able to be emotionally open to each other, vulnerable, mutually supportive, caring.”

One international global study showed that males have a stronger desire for tenderness than females. Of course, not all men and women are the same, but the findings were intriguing as stereotypically we are often led to believe that it is generally women who place tenderness as a high priority in order to feel satisfied. When a man has a high sexual drive we often associate it with their need to be touched, therefore if their partner does not feel in the mood for sex they may feel wary of being too physically close in case the wrong message was received. When, in fact, the studies showed the opposite and that when men receive affection and are emotionally intimate their sexual desires are balanced and they then fall into line with their partner’s. Overall, many men just have a strong pull to emotionally bond and when they are held in any form, this bond is reinforced and becomes stronger.

One of the most essential things for men is not only that they can explore their intimate emotions and feel safe to unravel their mind, it is also that they can trust that when they do they will not be crucified, mocked or ridiculed for simply expressing how they are experiencing their human existence. Men have the same capacity to love and to feel as women do and yet women generally seem to take the crown when it comes to the right to receive this kind of security. Neither is more deserving and neither has the autonomy over the depth or significance of emotional, mental, physical or spiritual experience or expression.

Not all men want to be held, or are ready for this type of intimacy. However, as long as they know that if they require it, there is a place they can go to connect in ways that fulfill some part of their mind, body and soul, they will come when they are ready.

Initially it may feel quite uncomfortable for a man to surrender, accept and admit they have these needs and they may not know how to approach someone or how to communicate how they feel. It isn’t about blame or shame and being either the woman’s fault for not holding a space, or a man’s fault for feeling unsure how best to approach this, it is about learning new ways of reconditioning society so that we all accept that it is possible for all men and women to have similar desires and needs.

It is never too late to undo our beliefs, start over and give one another the type of love, affection, communication, touch and connection we crave. Our actions will then naturally be passed on to our children and then they will pass them on at school and a new generation full of open hearted, fully accepting, caring and freely expressive individuals will be born.

We all have similar needs regardless of our sexuality and our affections and emotions make us strong, not weak and they most certainly don’t determine our sexual preferences.~